Incredible Before & After Inspiration

Sometimes it can be challenging to visualize what a space will look like after an update but that's precisely why before and after photos are so popular. And so necessary! There are literally hundreds of thousands of ways to enhance already beautiful spaces with stone elements and so the hard part really is finding the right look.

From spa-like feature walls to one-of-a kind sources of illumination to built-ins that invite you to stop and stay awhile, there's so much you can do with stone. We've chosen these five transformations to show you just some of the many possibilities. 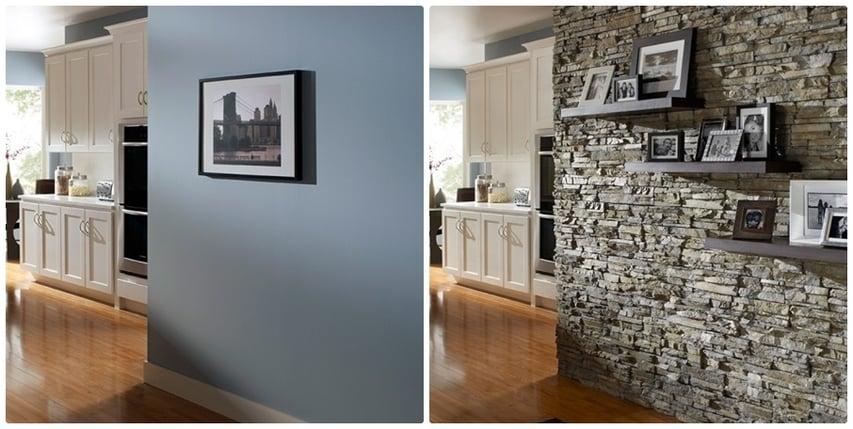 With a facing of elegant Stacked Stone, wall space that once did little more than mark the transition between rooms becomes a focal point all its own. The intricate detail of small stones draws the eye toward art and family photos on display while also adding warmth and bringing a touch of the outdoors in.

What may surprise you is how modern stacked stone feels and how well it can be incorporated into different décor styles. It can be particularly striking in entryways, where it smoothes the shift between interior and exterior. 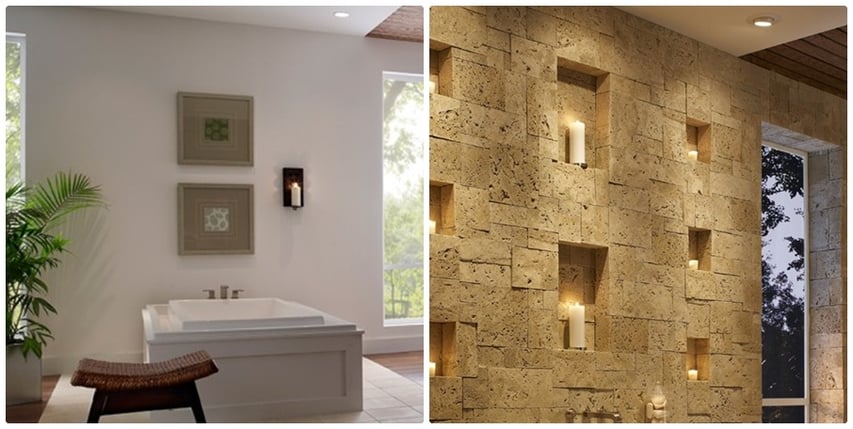 Lighting design is often overlooked in bathrooms, where the common wisdom suggests that brighter is better. This already beautiful bathroom became a spa-like refuge from the world with the addition of a CoastalReef accent wall featuring a multitude of recesses sized just right for softly glowing candles.

An accent wall can be its own focal piece but more and more designers are using accent walls as a canvas that can highlight anything from art to light. Here, the subdued color of the stone made the expansive tub stand out even more than it did before. 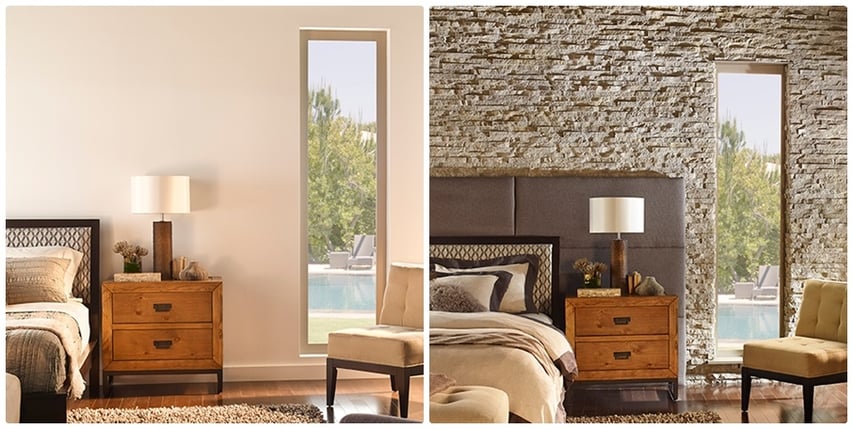 Stone may be a traditional building material but that doesn't mean it can't hold its own in urban, modern interiors. Split-face travertine gets an update in European Ledge, which brings old-world stonework and mod design to this ultra contemporary yet still comfortable bedroom.

One thing that stands out in this space is that the stone accent wall (when paired with an updated oversize headboard) acts like artwork. There's no need for additional wall décor because the weather-worn contours of the stonework bring fascinating color, texture, and movement to the room. 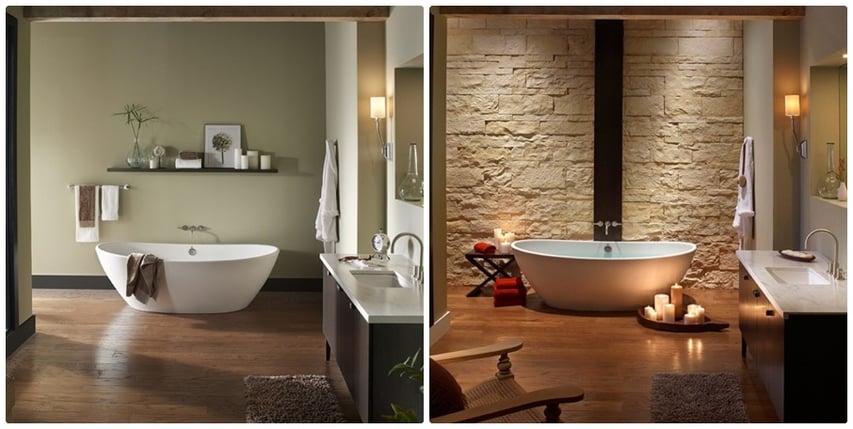 Mother Nature will always be the best interior designer and this gorgeous bath is proof. Whereas previously it was certainly spa-like, it was only after the addition of a wall of Cut Course Stone that the space began to feel like a true oasis. It's all about texture – the saw-cut look and feel of the stone balances the smooth lines of the fixtures for perfect harmony.

While it's tempting to think of stone as a material best suited for creating outdoor spaces, it can be the ultimate counterbalance for lackluster clean lines, flat edges, and the sanitized aesthetic too often found in bathrooms, kitchens, and other utility spaces. 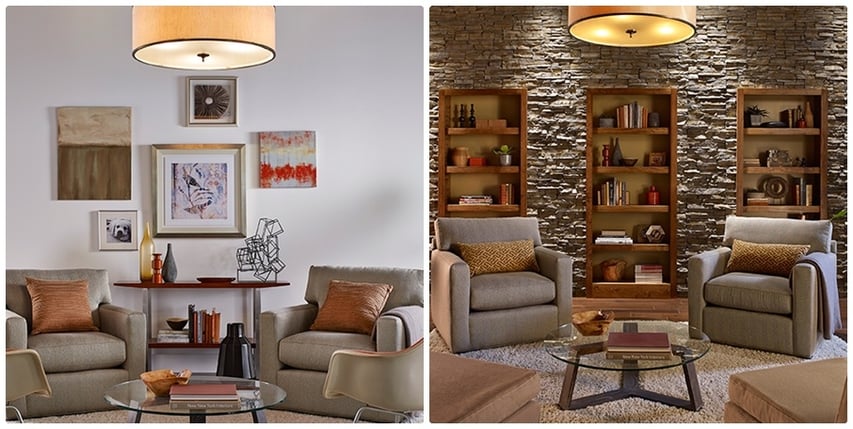 Wood and stone, when paired together, can be quite rustic and yet in this space the pairing is modern and sophisticated. Delicate, rough hewn Stacked Stone adds warmth and coziness to what was previously an attractive but emotionally chilly living area. Better still are the built-in shelves, which replace the wall art in a functional and inviting way.

Clearly stone accents and accent walls can enhance a room in a multitude of ways depending on the stone, the texture, the cut, and the color. A stone wall can be an art piece or bring balance to a space, help you release your worldly cares or make living areas more appealing.

As noted above, the key will always be having a strong vision and choosing the right stone. The more before and after inspiration you browse, the better your chances of finding the perfect look.

As Director of Marketing and Portfolio Management, Sarah has successfully coupled her design talents with business acumen to refresh, refine and distinctly position five standout brands in the North American market and abroad. She continues to provide design direction for the brands’ variety of best-selling modern profiles and trend-forward color palettes while enhancing the prestige of the category among masons, builders, designers, architects and consumers.

Accent Walls: 12 Gorgeous Examples That Will Inspire You

When it comes to what you wear, sometimes a small statement piece can make all the difference. Whether you’re getting re...

Home has never meant more to us than it has over the last year. From Zoom rooms to garages-turned-gyms, homeowners certa...

Flexible Functionality: Home Hosts it All

Never before in modern memory has the home meant so much, nor has it needed to bear the weight of such a diverse blend o...